Walking Among Heroes and Humorists

We arrived in Des Moines about an hour before the rain did. It had been threatening to rain for about 40 miles before we arrived, so I had urged Tim to find a place for us to get our walk in before the skies opened up. Severe thunderstorms were being predicted for the region.

He found the perfect place to walk right outside of town – the Iowa Veterans Cemetery. 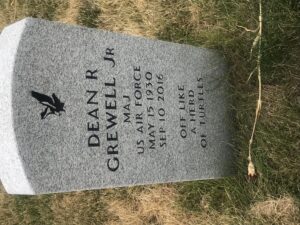 I can’t say I have ever been in a cemetery that I found as entertaining as the one in Iowa.

Not that the cemetery was without it’s more somber moments. There were those for sure. This moment at the end of memorial walk definitely took me back to an all too real memory.

But how can one not laugh when coming upon a headstone that reflects the family’s personality?

This was the moment when I knew I was in for a different kind of experience. I have been in dozens and dozens of cemeteries across the US and other countries. This was the first time I happened upon someone with my sense of humor.

This particular memorial would have been perfect for my own mother, had we been able to include such witty remarks. But it seems cemeteries, like towns, have personalities all their own. 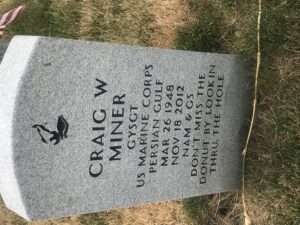 Perhaps if Neil Young had happened upon this tidbit of wisdom, he would have written the song differently: “Miner in search of a hole.”

There is a British cemetery outside the city of Bayeux, France, where loving tributes are inscribed upon the headstones. Many quote lines of poetry. One of the headstones in the Iowa cemetery had the inscription “Kilroy was here.” This was the equivalent of a World War II meme, graffiti commonly left behind by U.S. soldiers. 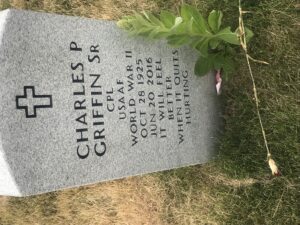 Of course, some headstones reflected the truth of a soldier’s post-war battles. As I’ve said before, the pain of war doesn’t end when the bombing stops. Not for a lot of soldiers and their families.

I suppose it isn’t surprising to find such a cemetery here in Iowa, home to the Iowa Writer’s Workshop. Writers like Flannery O’Connor, John Irving and William Kittredge have all come to Iowa to hone their skills. As I wandered through the headstones, I thought about how I would have loved to hear the stories these men and women told. It was obvious that many of them were the life of the party, never without a story to tell, a witticism to share, wisdom to impart.

The next time you find yourself in Iowa, make your way to the Iowa Veteran’s cemetery. You are sure to be entertained and perhaps prompted to consider what story you hope to write with your own life, and who is the smart ass in the family who will have the last word on your headstone.